Due to the aging population and the advent of expensive medications such as antibody drugs, medical treatment in Japan is changing drastically. As such, it is critical to control the cost of medical treatment while maintaining quality medical care by increasing the number of efficacious and affordable treatment options available. Furthermore, disease prevention is also an important issue.

Prof. Hironori Nakagami of Osaka University thought that a vaccine for lifestyle-related diseases could be a solution, so he began research on the foundational technology. In collaboration with Prof. Nakagami, we created innovative antibody-inducing peptides "FPP003" and "FPP004" to induce in vivo antibody production.

Antibody production by vaccine requires not only B cell activation, but also antigen presenting cell (APC) and helper T cell (Th cell) activation. After incorporating an antigen, APCs, such as dendritic cells, that have been activated by the innate immune response present the antigen to Th cells along with co-stimulatory molecules. These peptides within the antigens presented by APCs are called "helper T cell epitopes". The Th cells with T-cell receptors that bind with Th cell epitopes presented together with costimulatory molecules are activated along with B cells that present the same Th cell epitopes and incorporate the same antigen, thus inducing antibody production. Therefore, it is necessary to include the "helper T cell epitope" within an antigen to induce antibody production. Generally, vaccines are designed to use a highly antigenic protein containing this "helper T cell epitope" as a carrier to bind with B cell epitopes (peptides or molecules recognized by antibodies). In recently developed vaccines targeting the patient's own proteins, Keyhole Limpet Hemocyanin (KLH), Tetanus Toxoid (TT) and Diphtheria Toxoid (DT) have been used as carrier proteins.
While these carrier proteins are highly immunogenic, there are concerns of side-effects including allergic and autoimmune responses. Furthermore, the carrier protein may induce a greater immune response against itself than against the target protein. In addition, it has been reported that product quality is troublesome to control as it is difficult to homogenously induce antibodies due to random chemical reactions causing the carrier protein to bind to B cell epitopes. 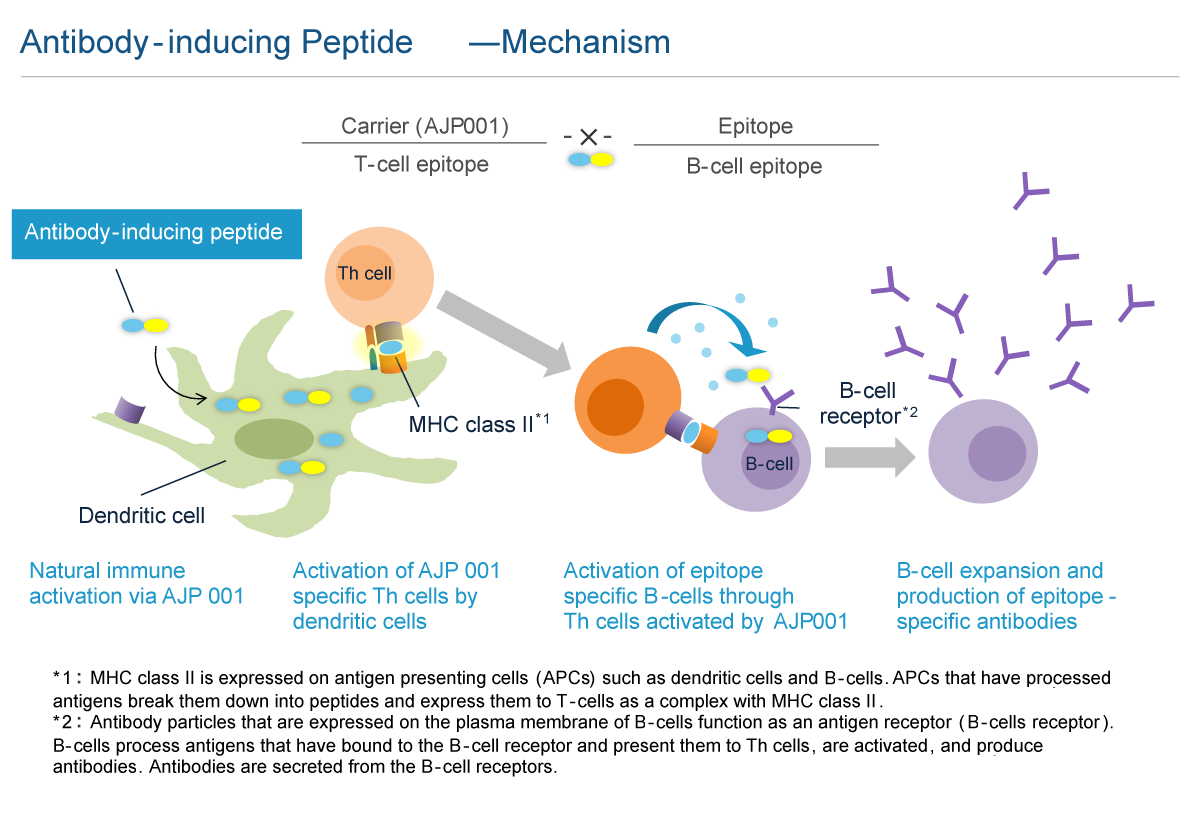 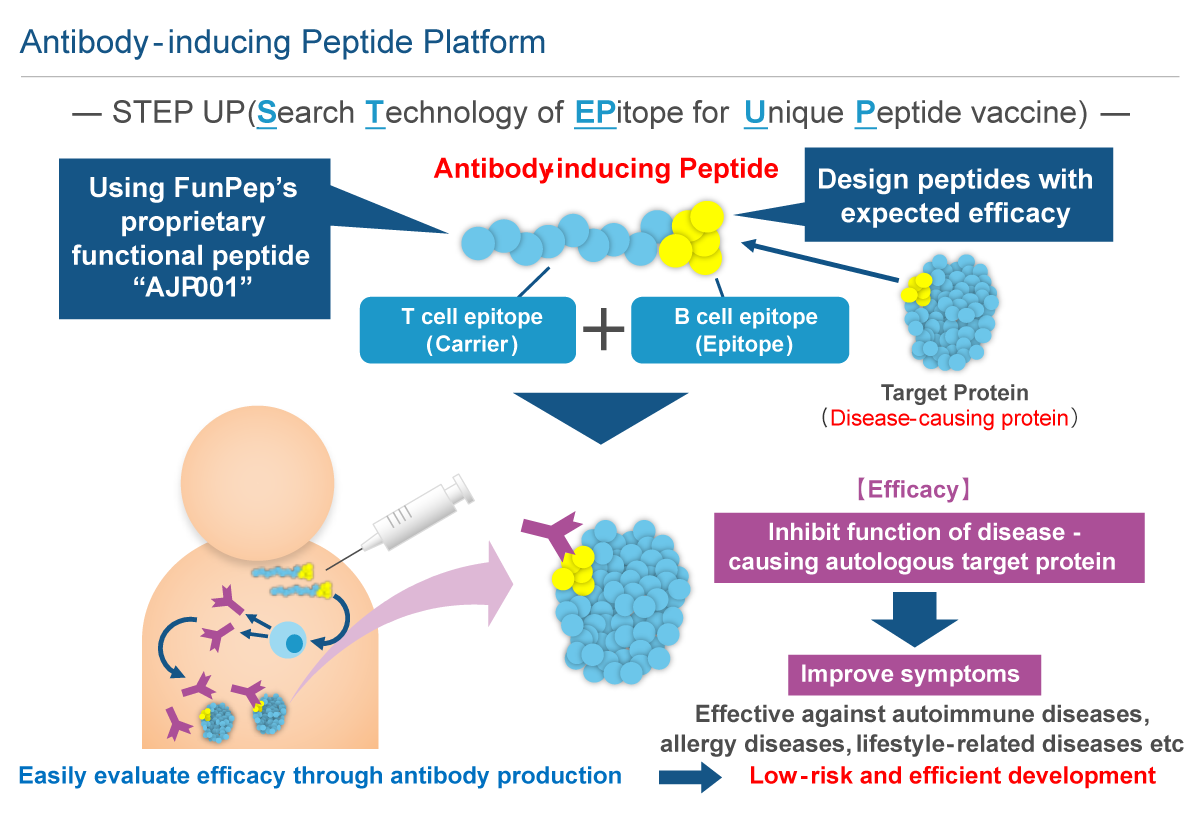 Antibody-inducing peptides are designed to sustain efficacy over the long term through in vivo production of antibodies that target disease-related molecules. Although antibody drugs are highly effective, their high costs limit patients' access to treatment. Additionally, high drug prices have a negative impact on national healthcare expenditure, which has become a serious social problem. Antibody-inducing peptides are anticipated to be inexpensive alternatives to antibody drugs, which require large investments in manufacturing plants. Thus, antibody-inducing peptides promote patient access to treatment and address problems with national healthcare expenditure.

The commercialization of antibody drugs began with the first approval in the world by the FDA of Genentech's HER2-targeted antibody drug, trastuzumab in 2001. Since then, more than 50 types of antibody drugs have been approved in Japan, Europe, and the United States. Antibody drugs are looked to as effective drugs with few side effects because they bind to specific target molecules; however, their high costs present a problem for national healthcare expenditure, a situation currently being deliberated.
As antibody-inducing peptides are cheaper than antibodies, they are a highly anticipated innovative alternative to antibody drugs that can help improve the national healthcare expenditure situation. Furthermore, antibody-inducing peptides have the potential to significantly change how drugs are developed if it becomes possible to treat lifestyle-related diseases that were not targeted by antibody drugs due to their expensiveness. 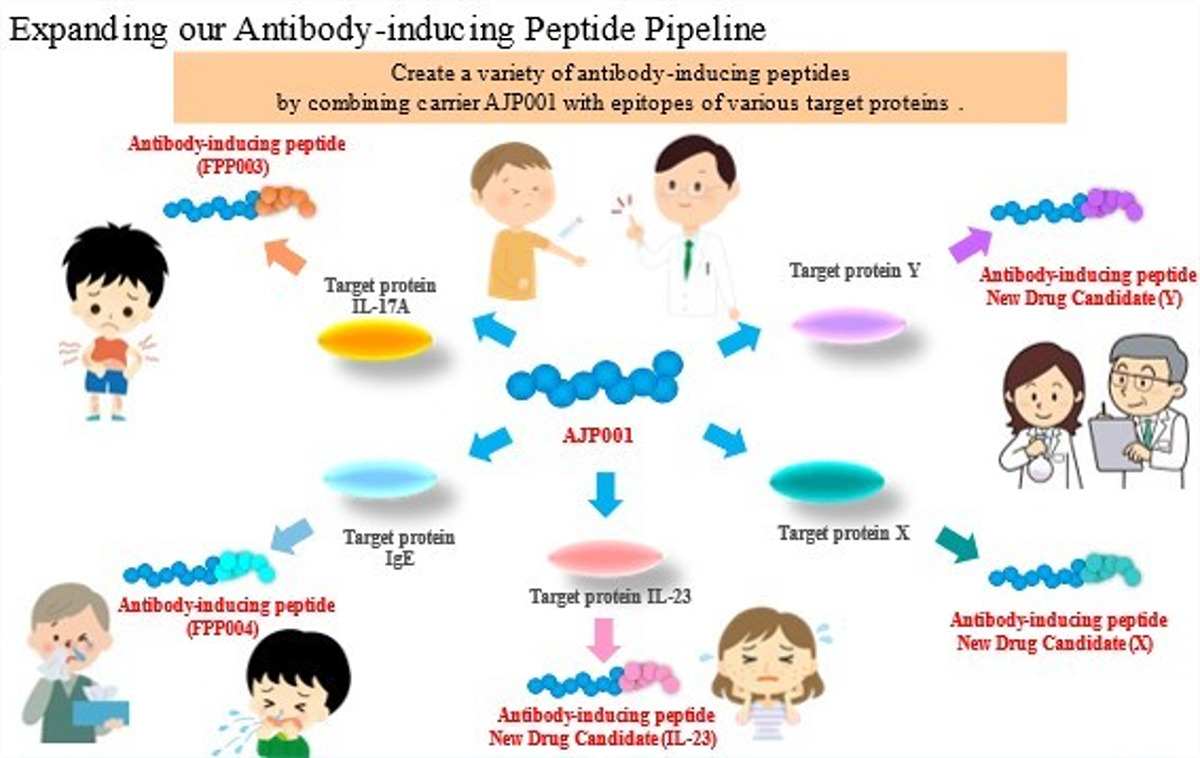